Variations in Fetal Orientation During Pregnancy

Obstetrics litigation often boils down to a question of what events occurred within the uterus during development or during the birthing process. Often, if we are to understand what happened to the fetus at a crucial moment in the pregnancy, we need to have a clear understanding of how that fetus is positioned within the uterus or the birth canal. For this reason, issues of fetal lie, presentation, position or station are eventually discussed in almost all obstetrics cases. Therefore, I will try to provide you with a basic understanding of these concepts so that you can better visualize the wide variety of ways that the baby can be positioned within the mother.

First of all we have to establish our terms. For the purposes of this conversation, I’d like for you to visualize the mother in a standing position so that “down” is toward her feet and “up” is toward her

Keep in mind that it is of paramount importance to know the orientation of the fetus within the uterus, particularly at the onset of labor. Orientations that are not ideal may require intervention and, in some situations, cesarean delivery may be the only viable option. During labor, an appreciation of the fetal station within the birth canal can help us to judge how the labor is progressing and which delivery techniques may be warranted at a given time.

Once we know the lie, we can determine the presentation. The presentation can be either cephalic or breech, which means that the fetus can be either “head-down” or not. There are a number of different types of cephalic presentation, but the most common is called vertex presentation which refers to the fetus entering the birth canal head first with the upper occipital (back) portion of the head leading the way. 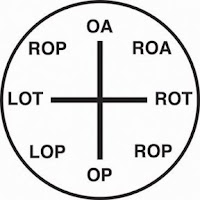 Finally, we can discuss fetal station. The fetal station is a measurement of how far the fetus has progressed down through the birth canal during delivery. This measurement reflects the relationship of 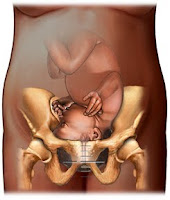 You should be aware that a previously widespread system, the “thirds” system, divided the space above and below the ischial spines into arbitrary thirds so that the stations progressed from -3 to +3 without regard to actual centimeter measurements. This is important because only 0 station coincides in these two systems and you can get an inaccurate picture of the case facts if the correct system is not used. To complicate matters, many doctors and hospitals still refer to the old system so it is best to establish early which system is being used in the records of any particular case.

These are the key terms that you will encounter when researching almost any case involving birth injuries or obstetrics mal practice. Hopefully this overview has given you a better understanding of the varieties of fetal orientation and will help you to better visualize the lie, presentation and position of the fetus within the womb.
Posted by Benjamin B. Broome at 2:53 PM