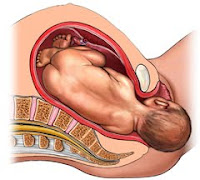 Although downward traction and fundal pressure are maneuvers that should be avoided, there are several acceptable maneuvers that can often release the shoulder of the infant. Of all of these, some so desperate that they include fracturing the collar bone of the fetus, there are three that we so most frequently in these cases. The first is called the McRoberts maneuver. This is simply the elevation of the mother’s legs with the knees forced back toward the abdomen. This flexion of the hips causes a substantial change in the angle of the pelvic outlet that can often allow for more easy passage of the infant. Next, there is suprapubic pressure. In this maneuver, a nurse or assistant presses down on the lower abdomen directly above the mother’s pubic bone providing direct pressure on the baby’s shoulder and hopefully dislodging the dystocia. Finally, there is the Woods corkscrew maneuver. This maneuver involves the insertion of the doctor’s fingers into the vaginal canal just behind the baby’s posterior shoulder. Then, with gentle pressure, the shoulder can be rotated in a corkscrew fashion turning the baby into a more horizontal orientation and releasing the anterior shoulder from behind the pubic symphysis of the mother.
Posted by Benjamin B. Broome at 3:22 PM 3 comments: