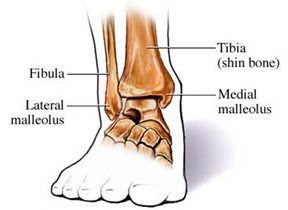 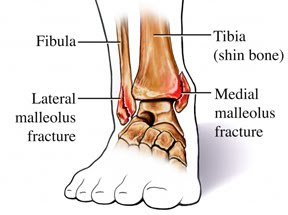 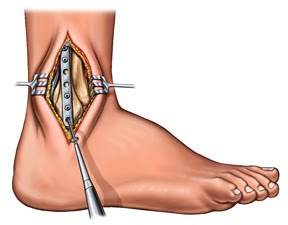 Fractures of the various malleoli can often be treated conservatively with immobilization or casting of the ankle. Internal fixation surgery is also common when metal hardware is required to secure and stabilize the fragments while the fractures heal. A variety of screws or plates and screws may be employed based on the nature of the fractures and the preferences of the surgeon. This hardware is often left in place permanently although it is not uncommon for the hardware to be removed in a subsequent procedure if it causes any difficulties after the fractures have healed. Disruptions of the syndesmosis can also be repaired surgically. These procedures can include repair or reconstruction of the ligaments or the placement of long screws that traverse both the tibia and fibula to hold the distal ends of these bones together in proper alignment.
Posted by Benjamin B. Broome at 3:32 PM No comments: