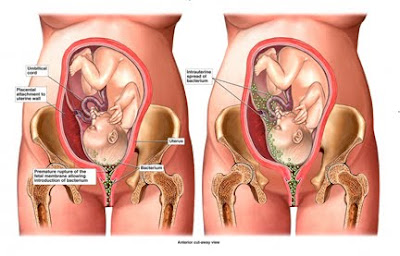 Several years ago, when my wife was pregnant with our son, I contracted a human parvovirus. Having assisted on a few cases involving gestational infections, I was quite concerned and sought treatment immediately. We also notified my wife’s obstetrician and took steps to avoid transmission of the virus to her and the developing child. Thankfully, our doctors took this situation seriously and followed us closely to be sure that there was no risk to the pregnancy. Pregnancy often leaves the mother with a weakened immune system. Infections can be a great risk to the fetus. Therefore it is an important responsibility of the obstetrician to avoid and treat infections in a timely manner.

Congenital infections can be caused by protozoan parasites as in toxoplasmosis, bacteria as in syphilis, or by a variety of viruses such as rubella, cytomegalovirus, herpes or human parvovirus. Each different microbe is a risk to the developing fetus at different stages of development. Some may interfere with development leading to deformities or developmental abnormalities. Others may lead to fetal death and miscarriage. It is important that the mother be monitored for infections throughout the pregnancy and that any infection be treated promptly. 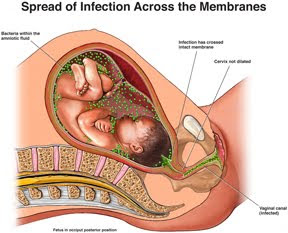 Perinatal infections are caused by bacteria such as strep or viruses such as herpes or the human papilloma virus that may be present in the vagina during labor or delivery. These infections include many sexually transmitted diseases that can infect the baby during delivery. Another risk comes from fecal material that may contaminate the birth canal during labor. As mentioned above, some of these infections may cross the fetal membranes and infect the fetus in utero. Others may move into the womb after the membranes are disrupted (water breaks). Certainly the fetus is exposed to any infections within the vagina during the process of delivery as the baby passes through the birth canal. Once again, it is the responsibility of the obstetrician to recognize and treat any vaginal infections prior to delivery to avoid this contamination.

Postnatal infections involve many of the same bacteria or viruses mentioned above and can pass from the mother to the child through the breast milk. These infections can be easily avoided if the mother has been properly diagnosed and breast-feeding is delayed until after treatment is complete. 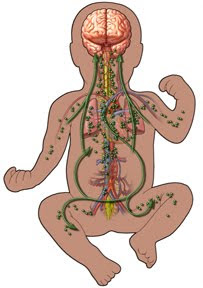 In each case of fetal infection that I’ve worked on over the years the issue being litigated is either the failure to diagnose a maternal infection or a failure to treat the infection or take steps to prevent contagion. If, in future cases, you encounter issues of fetal deformity or fetal demise, it would benefit you to do a thorough examination of the medical records to see if there is any evidence of infections that existed in the mother that may have contributed to the outcome of the pregnancy.
Posted by Benjamin B. Broome at 11:41 AM 4 comments: