I received a call last week from a client who wanted to know which side of the neck contained the carotid artery and which side contained the jugular vein. I was a bit shocked at first but after giving it some thought I have realized that, although my clients are highly educated, their expertise is in a completely different area. Some things that I consider common knowledge may be completely unknown to those who missed it in high school biology class and haven’t come across it since. Therefore, I think it might be helpful for me to offer a basic primer on some of the major anatomy and physiology concepts in these blog posts I write each month. Today, in honor of that client who was trying to find the carotid artery, I’ll cover the basics of the circulatory system. 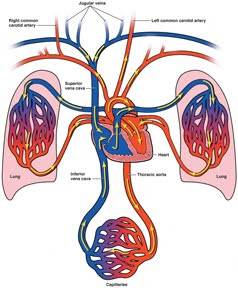 The circulator system (cardiovascular system) is easiest to understand if you divide the structures into three groups: 1) the heart, 2) the great vessels, and 3) the peripheral vessels. But overall, we must first understand that the circulatory system is a transportation system like a series of highways and smaller rural roads that act together to provide oxygen and nutrients to the various tissues of the body and to carry away waste materials and toxins. I will use this transportation and roads analogy extensively throughout this primer. I use this analogy rather than a similar analogy based on rivers or house plumbing because roads allow traffic in both directions. Arteries, which carry blood from the heart out to the body, and veins, which carry blood from the body back to the heart, often run together side-by-side, just like the north and southbound lanes of traffic on a highway. 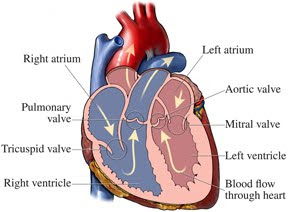 The heart is a fist sized muscular organ that pumps the blood throughout the circulatory system. The heart is divided into four hollow chambers, two on the right and two on the left. The two upper chambers of the heart are called atria (singular, atrium). The two lower chambers are called ventricles (singular, ventricle). All blood enters the heart through the atria. The deoxygenated blood carrying waste carbon dioxide enters the right atrium through the superior vena cava and inferior vena cava, the largest veins of the body. Freshly oxygenated blood arrives into the left atrium from the lungs via the pulmonary veins. These atria are relatively thin walled without much muscle and their only task is to pump the blood that they receive from the veins down into the ventricles below. The ventricles are responsible for the major pumping action of the blood and therefore have much thicker muscular walls. The right ventricle pumps blood out to the lungs via the pulmonary arteries where the blood can release the built up waste carbon dioxide and take on the all-important oxygen in a process called gas exchange. The left ventricle pumps blood out through the aorta that, through the variety of branches and divisions we will describe below, will reach all regions of the body from the top of the head down to the bottom of the feet. 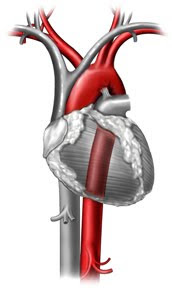 The great vessels are the major arteries and veins that connect directly to the heart. Each of the great vessels is unique so some memorization is required but there are only a few so we should be able to cover them quickly. Let’s start with the arteries. As I mentioned above, arteries carry blood away from the heart. The aorta is the largest artery in the body since it is the major highway for blood flowing to all regions of the body. It is easily recognized because it arises from the top of the heart, forms a large loop (the aortic arch), and courses down behind the heart and down through the midline of the chest and abdomen. The aortic arch has three large branches in the upper chest; the brachiocephalic artery, the left common carotid artery and the left subclavian artery. The brachiocephalic, which courses upward and to the right soon divides into the right subclavian artery and right common carotid artery. As the aorta courses down through the back of the abdomen, it has a number of branches that vascularize the abdominal organs and spine. Low in the abdomen the aorta divides (bifurcates) into the left and right iliac arteries that course down through the pelvis and into the legs. Another artery that arises from the top of the heart is the pulmonary trunk that bifurcates into right and left pulmonary arteries that send blood out to the lungs. This division of the pulmonary trunk forms a capital T shape and lies just beneath the aortic arch. The great veins include the superior vena cava, inferior vena cava and the pulmonary veins. All blood returning to the heart from the arms, upper torso, head and neck enter the superior vena cava from the right and left jugular veins and the right and left subclavian veins via the right and left brachiocephalic veins. The blood returning from the lower body enters the inferior vena cava that runs alongside the distal aorta in the back of the abdomen. Four separate pulmonary veins provide blood flow from the lungs into the posterior aspect of the left atrium. 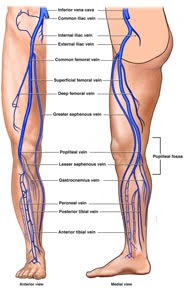 The peripheral vessels are a bit easier to recognize and remember because many of the peripheral arteries and veins have an adjacent course (like north and southbound traffic) and have identical names. This is true for the iliac, femoral and popliteal arteries and veins in the legs, the subclavian, brachial, radial and ulnar arteries and veins in the arms and the carotid arteries and jugular veins in the neck. What confuses many is the fact that many of these different vessels are actually just the same continuous structure that has different names depending on the location. Think of a street that changes names for no apparent reason when you go through an intersection. The subclavian artery becomes the brachial artery when it passes from the chest into the upper arm and then becomes the ulnar artery after the radial artery branches off in the elbow region. Also it is good to remember that, except for the vessels of the chest and abdomen, all vessels are symmetrical with the exact same structure in each arm, each leg and on each side of the head and neck.

As with the skeleton and the various muscles, the circulatory system can be intimidating simply because of the vast number of structures and multiple names for each. The good thing is that few need to remember each and every structure to understand the system as a whole. You can always refer back to illustrations and diagrams to find the exact location or name of each vessel, but it is good to retain a working knowledge of how the blood is pumped by the heart, taken out to the body via the arteries and returned to the heart via the veins. 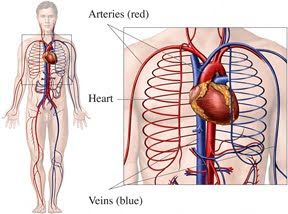