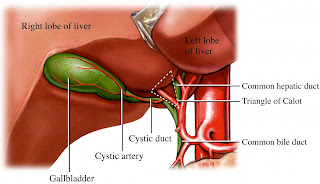 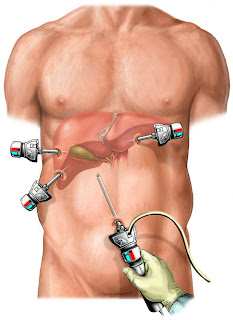 Narrowing or occlusion of the bile ducts can lead to a back up of bile leading to damage to the liver. Excision or division of the bile ducts results in leakage of bile into the abdominal cavity leading to widespread infection and peritonitis. This can damage multiple organs and even result in fatal sepsis. Complications are generally minimal if the errors are realized during surgery or recognized promptly. The most serious cases generally involve delays or failure to diagnose the complications. Treatment of intra-operative bile duct injuries often involves a complex open procedure called a hepaticojejunostomy (or Roux-en-Y) in which a loop of small intestine is divided and pulled up to the liver where the small bowel is connected directly with the damaged bile duct. This procedure is much more involved than the original laparoscopic cholecystectomy procedure and results in all of the post-operative negatives that the laparoscopic technique had attempted to avoid. These negatives include pain, scarring, extended hospital stay and prolonged recovery. In worse cases, continued complications can result in multiple surgeries, progressive deterioration and even death. Even in the best cases, patients experiencing iatrogenic bile duct injuries will experience a decreased quality of life moving forward.
Posted by Benjamin B. Broome at 4:05 PM